More on the Clock

Went back to watch another hour of Christian Marclay's Clock today.  Very wittily, at 4:45 p.m. Marclay has a clip in which a museum is being closed in that way that museums that close at 5 really start closing at 4:45 -- wittily because just then a stentorian guard came in to intone, over the movie (which kept playing) that it was 4:45 and the museum was about to close and we'd have to make our way towards the exits.  Art museum life imitates art museum art!  Like that Oskar Schlemmer painting of the Bauhaus stairway hung on the wall of the very similar stairway at the old MOMA: 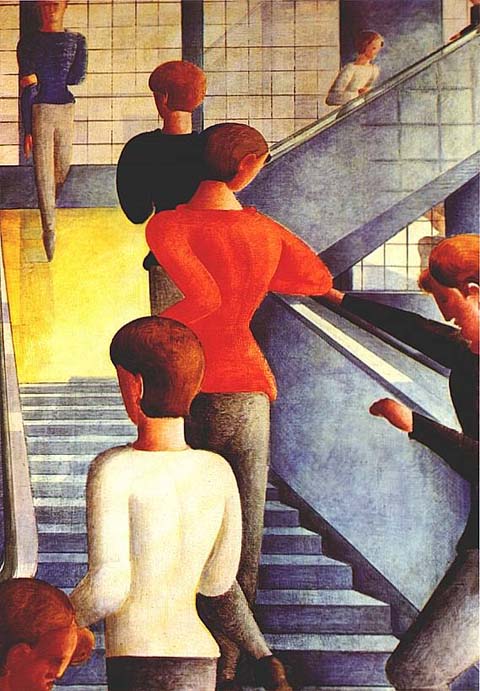 Anyhow, what I noticed this time: how well the cuts between scenes were made, so that there was a quasi-narrative going on (a person made a call at 4:12, a person picked it up a call in the next scene) - effect intensified by sound-bleeds from cut to cut (sometimes anticipating, sometimes lagging the cut).

Quasi-narrative is film's stock-in-trade.  Film relies on the horizon of working memory, on coherence over the last minute or so, without much concern for what's over the horizon.  (Memento is an exemplary demonstration of and inquiry into this idea.)  Sure, most narrative films can be recollected later as more-or-less coherent narratives.  But on the middle levels, the way scenes put people together or tear them apart, can only make sense if we forget that not one minute earlier everything was terrible, or everything was fine.  And on the larger levels, many a movie is just as incoherent (cf. The Big Sleep): movies can afford to be.  The Clock gives you a kind of mosaic of narrative, in working-memory-long clips.

This also made and makes cross-cutting work: as I said before, we recur to some narratives in which time is of the essence.  We check back every time some character is also checking back.  One of those today -- a chess game at a cafe with one of the players watching the tensely photographed clock, awaiting the murderer of the other, perhaps -- turned out to go on for at least half an hour in real time. No doubt in the original film, which I didn't know, the scene lasted more like three minutes, though also, it must be, with cross-cuts that we didn't get to see.  (I think probably that there were no cross-cut clips in The Clock, that every cut to another location was Marclay's, not the source's.)

I also noticed the obvious but deep fact that every film in The Clock was fictional.  This makes an interesting difference: it means that at no point can we infer what time it was in reality on the day the film was shot.  (This is probably not strictly true: there must be location shots with real clocks in them.  But still, the principle of the thing:)  All the clocks and watches depicted fictional times.  Sure, they might accidentally correspond to real times, just as there might accidentally and unknown to Doyle be a real Sherlock Holmes (David Lewis's example), who did and acted just as Doyle's fictional one did.  But Doyle would not be referring to this one, and these clocks would not be referring to real time.  But in our world they do, since The Clock is a clock, and you always know what time it is.

You know what time it is in the theater, though you may not know what time it is in the fiction.  This is because in the sequence I saw today, some of the clocks were stopped.  In a museum (perhaps the one that shooed people out at 4:45, but I don't think so), two characters look at a collage comprising pornographic magazine photos and photos of clocks, all showing the same time (the time The Clock is telling).  Later a character comes in to find that his clock has been smashed.  We can see when.  It's the time on our watches.  But clearly the clock has stopped long before.  (And later there's another clip, Sound-and-the-Fury-ish, with a stopped watch and broken crystal, though I think maybe we see its owner breaking it with a hammer.)  I wonder whether Marclay has the scene from Chinatown where J.J. picks up the crushed pocket watches he's placed under Mulwray's tires to see when he drove off.  I wonder again - well, that's what the movie makes you do - whether Hitchcock winding the clock in Rear Window appears.

So what that made me realize is how much the movie is about clock- and watch-faces.  How much, again, it's about movies themselves, and in particular watching movies, watching faces, looking at the photographed face.  Hitchcock's joke in the Mt. Rushmore scenes of North By Northwest and Marclay's is about the fact that movies show faces on screen at unprecedented sizes: human and clock faces.  (Well, Big Ben may be as big as any photographed clock, I guess.)

As Gloria Swanson put it in Sunset Boulevard: "We had faces!"
Posted by balaustion at 9:27 PM