An idea basic to game theory is that players will play their best moves, if there is one, that what defines your best move is in part determined by what defines the other player's best move, and vice versa. This means that playing a move in a game in which the players have incomplete information (most of them: Old Maid, Stratego, Bridge, Blackjack) always conveys some information: not only the trivial fact that a player has made this move, but that this move is the best one they could make in their position.

Interesting games, then, are those in which players have to balance their provisional best move against the valuable information that making any move, no matter what it is, will divulge.  Bidding in bridge provides a good example of this dynamic: the cost of getting trumps in your long suit is a declaration of what cards you're likely to have, based on how much you're willing to pay to make those cards trumps.  But Clue is essentially the same (what information are you looking for, what are you pretending not to have, what are you pretending you do have?) as is poker: even five-card draw: are you taking two or three cards? two cards might mean three of a kind, but if it's a bluff based on a pair and a third card, you've also reduced your chances of drawing to three of a kind considerably.

Bluffing is a way of trying to convey disinformation: part of what will make a player decide that bluffing is her best move is that it's disguised as a different 'best' move.  If it looks like my best move is to take two cards, then it looks like I have three of a kind.  Conversely, I might pay to keep information secret, for example by taking only one card with three of a kind to try to convince you that I only have two pairs: doing this cuts my chances of getting four of a kind in half (to 1/47).

Now, the game I am interested in is that between story and audience.  Stripped down this is a two-person game, but that may be too idealizing since we have to take into account Author, narrator, narratee, other audience members, and (following David Markson) Reader.  Have to take them into account because the question of rooting comes up.  In fact I think that one of the most important tasks of the mildly game-theoretical account of narrative I am trying to work out is to figure out the game that rooters and kibbitzers are playing.

So there are two different types I might make a side-bet against: the serenely confident malevolent (those who wish the wrong thing); and the benevolent faithless (who wish the right thing but doubt it will happen).

In narrative, the malevolent (leaving Oscar Wilde's laughter aside) tend to be villains in the piece (including sometimes author and narrator).  Whereas those of little faith will often be found in the piece, but also found on our side of the narrative divide, in the narratee and in other audience members.  Obvious examples of the malevolent include the head-suitor Antinous in the Odyssey, Don John in Much Ado, Oswald and Edmund in King Lear, Blifel in Tom Jones, Mary Crawford in Mansfield Park, Mr. Elton in Emma, Mr. Grimwig in Oliver Twist, La Cousine Bette, Madame Merle in Portrait of a Lady, Major Strasser (Conrad Veidt) in Casablanca, and also Captain Renault (Claude Rains), and Father Gomez in The Amber Spyglass.  These examples show that there are various ways that the malevolent may lose their bets: they may consciously have to realize and suffer the judgment the narrative gods visit upon them (Antinous, Don John, Blifel, Strasser, Mary Crawford, Mr. Elton, Madame Merle); they may change their bets, often just in time (Edmund, Grimwig, Captain Renault, also Mary Crawford); they may think that their bets will eventually be vindicated, even after their deaths (Oswald, Father Gomez, Major "King" Kong [Slim Pickens, riding the bomb like a cowboy hellbent for hell] in Dr. Strangelove).  And sometimes the malevolent win their bets -- which is to say that the outcome of the story does not confute the obnoxious line they take: (Rodolphe in Madame Bovary, for example, possibly Caesar in Antony and Cleopatra).  And sometimes, especially in Shakespeare, you get characters who seem to combie all these seemingly incompatible positions simultaneously, like Edmund and, the villain of villains in Shakespeare, Iago.1

What makes Flaubert Flaubert is that we have to live with that. And this fact, the fact that Emma isn't vindicated, as we in our Balzac-trained naïveté might have bet she would, the fact that we've lost our standing bet on novelistic satisfaction helps shed light on a feature of side-betting that might at first make it look somewhat different than the main game. When I bid one heart in bridge I'm suggesting something like being long in hearts (depending on the convention, of course; but as my bids get higher, they become more straightforward declarations of the hand I'm holding); when I bid one heart reading Flaubert (after all I've loved Un Cœur Simple), I don't seem to affect the play - either in the main game Emma and Rodolphe are playing, nor in the side-bets between me and the more cynical reader, nor between me and the narratee.

Notice that this question also pertains to the narratee, who inhabits a peculiar temporal space, more peculiar than the narrator's, since she is learning the story as I learn it, even though she's an already completed creation of the story.  The narrator is like the Augustinian God in Paradise Lost: outside of time, having arranged the whole story, so that any moment of the telling includes what is to come as well as what has happened and what is occurring now. Indeed Augustine compares God's command of the whole of time to the knowledge of a psalm, that is a literary text, where every moment contains within it the compression of the whole.2  But the narratee knows only what has come before, and what is happening now, though she will certainly be predicting and anticipating how the story will unfold.

Let's begin by asking the slightly easier converse question: what information does the narratee's taking the opposite bet convey to me? For one thing the narratee (and more subtly, the other audience members) represent for me a possible outcome to the story - a possible pathway which helps map the terrain the actual pathway finds its way through.  Now, I can sometimes get this information very explicitly, from a narratee as character (e.g. Belford or Anna Howe, receiving a letter from Lovelace or Clarissa), or from a worrying or gloating window character (Horatio, Enobarbus, Poins), or from a Chorus, sometimes continuous with the other audience members (as in some of the sly induction scenes in Elizabethan drama).

But sometimes I can only get this information from narratees (and also from other audience members, in the silence of a theater) who say nothing and indicate nothing about what their own anticipations are.  I have to understand what they -- the narratees, the expected interpreters -- must be thinking.  The author or narrator has to give me to understand their thoughts or reactions.  James may be the writer who most explicitly makes this into a theme: we need to think like Isabel Archer or Merton Densher or Maggie Verver, to understand exactly what the silences of Madame Merle and Osmond, of Milly Theale, of the Prince and indeed of Adam Verver, must mean.  Adam Verver is of course the crowning case here: everything depends on Maggie's understanding everything his complete inscrutability (inscrutable to the point of its not being clear whether he's inscrutable or not) might signify.

So the side-bets are bets between me and a silent narratee (the last narratee, the person over whose shoulder I am always reading or watching, is always silent).  Since the interest of narrative always includes wishful thinking (if I weren't wishing I wouldn't be interested), I bet that there's still a way for things to work out.  I take some vicarious pleasure in thinking the narratee thinks there isn't a way for things to work out.  That pleasure is generous, at least seen from the right perspective: the narratee will, I am sure, be delighted that things work out, and I anticipate that delight with delight. The narratee will be delighted to lose, so in a sense it's a win-win situation.

But on the other hand, the narratee is betting against me, in her stony, silent, hsst-don't-bother-me way.  She doesn't think things will work out at all.  She thinks I'm naive.

So we're both conveying information in our bets, in our moves.  This information is moral, you could say, or characterological.  I show my naivete, perhaps, my naive love of fiction, or my bent towards the fictitious. I stand for wish-fulfillment and fantasy.  The narratee shows her disabused knowledge of reality.  The world doesn't work in the lovely-to-think-so way I want it to work.

This information is important to the fictional interaction.  It sets up the stakes of the fiction.  In the conflict between life and wish-fulfillment, will wish-fulfilment find a way?  How much reality can I know is true, can the narratee emblematize, without the destruction of the wish?  The balance is different in different genres, along different dimensions of ambition: commitment to truth, to life, to hope, to cleverness, to seriousness, to verisimilitude, etc.  Our side bets bring out these different dimensions, bring them into relief, so that they become part of the story, part of the stakes of the story.  The information these moves reveal is part of the story-information.

1 Who, Trilling points out, is the only character identified as a villain in the original dramatum personae.  (Trilling doesn't point out that only seven of the First Folio plays have lists of the "Names of the Actors" as it calls them.)  Here's what the Othello list looks, like:

[Brandeis University First Folio]
You ask, What's right under "The Names of the Actors"?  X-P
2 Leonardo will later point the same thing out about the focal point in a camera obscura: the entire image is compressed into a single point before decompressing upside down.  That spatial point in the camera obscura is analogous to the temporal instant in Augustine's and Milton's thinking. 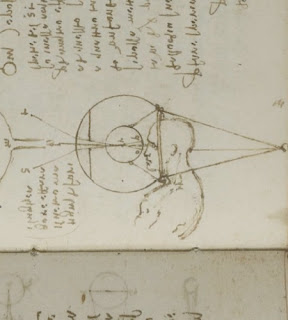 Posted by balaustion at 8:09 PM